To have the optimal experience while using this site, you will need to update your browser. You may want to try one of the following alternatives:

Powerful Storms are Here to Stay 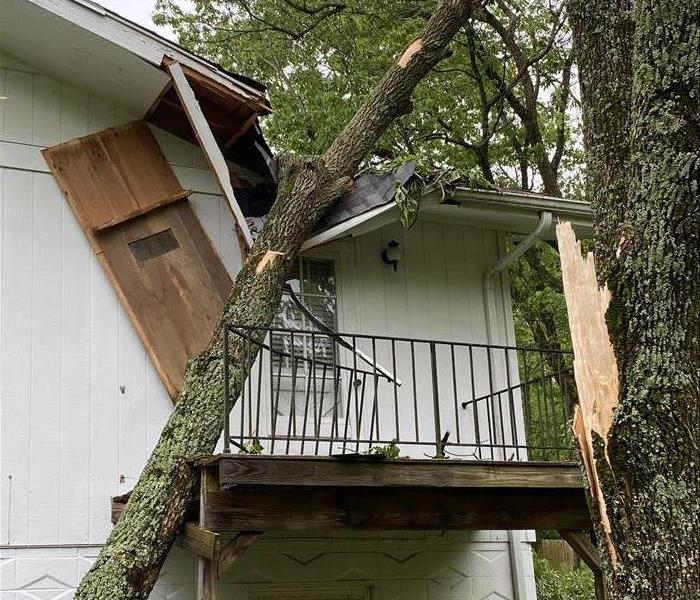 A tree has fallen on a home after a strong spring storm came through the Springfield area.

Does it seem to you that Missouri storms are becoming both more frequent and more violent? Well, they are. Actually, there has been a staggering rise in the number of extreme weather events globally over the past 20 years, driven largely by rising global temperatures and other climatic changes.

The UN Office for Disaster Risk Reduction (UNDRR) has published a report showing that from 2000 to 2019, there were 7,348 major natural disasters around the world, killing 1.23 million people and resulting in $2.97 trillion in global economic losses. By comparison, the previous 20-year period, 1980-1999, had 4,212 natural disasters, claiming 1.19 million lives and causing $1.63 trillion in economic losses.

A recent U.S. government report shows the devastating effects of climate change. The U.S. Global Change Research Program, a team of 13 federal agencies, was put together with the help of 300 leading scientists. It found that if greenhouse emissions aren’t reduced, the annual average global temperature could increase 9 degrees Fahrenheit or more by the end of this century. This will cause more occurrences of fires and flooding.

In areas with forests, the report anticipates that wildfire seasons could burn up to six times more land annually by 2050, damaging buildings in those regions. On the coasts, facilities and infrastructure are threatened by rising sea levels, flooding, and storm surges, which will affect $1 trillion of real estate. Sea levels have already gone up 7 to 8 inches since 1900, with almost half that rise occurring since 1993.

On top of that, a recent study published in the journal Science made known that the frequency of large-scale tornado outbreaks (events lasting one to three days, featuring several thunderstorms along with six or more tornadoes in close succession) have been increasing in the U.S., almost doubling in the last half century.

Why You Should Plan a Course of Action

"These are all things we should expect to see more and more of as climate change takes a deeper hold on our climate and on the extremities that it creates in our weather," Jeff Schlegelmilch, director of the National Center for Disaster Preparedness at Columbia University, told weather.com in a recent interview.

We don’t provide this information to scare you. These are realities of the times we live in. They’re also an important part of the challenges that many in Missouri will face in coming years as we’re forced to prepare for more instances of fires, flooding and wind damage.

What Can Homeowners Do?

Acting swiftly is crucial as this will lessen damage, limit further loss and reduce restoration costs. Know ahead of time who to call for help if storm damage occurs. As a locally owned and operated business SERVPRO of Springfield/Greene County is nearby and ready to respond 24/7 to your flooding or storm damage emergency. We specialize in flooding and storm damage restoration, the cornerstone of our business. Our highly trained crews have the specialized equipment and resources to handle the job and get your home back to normal quickly.

What Can Businesses Owners Do?

To eliminate as much down time as possible, it’s important to plan now for disasters. Preparedness planning tools like the SERVPRO Emergency READY Program can help business owners know who to call and what to do when disaster strikes. Under this program, a business owner works with a SERVPRO disaster recovery specialist to create an Emergency READY Profile (ERP) for their facility, at no charge. This comprehensive document contains critical information about the business, including emergency contact information, shut-off valve locations and priority areas.

Having this information in hand helps business owners and SERVPRO of Springfield / Greene County react to an unexpected event quickly and effectively to help minimize business interruption. And, because disasters are unexpected, there’s a Smartphone app and web version of the Program available to provide business owners with access to their ERP 24/7.

So, whether you’re a homeowner or business owner, small or large, and you’ve experienced storm damage, give SERVPRO a call. Besides having a national network of over 1,700 franchises, we also have access to special Disaster Recovery Teams strategically located throughout the country to respond to catastrophic storms and events day or night.